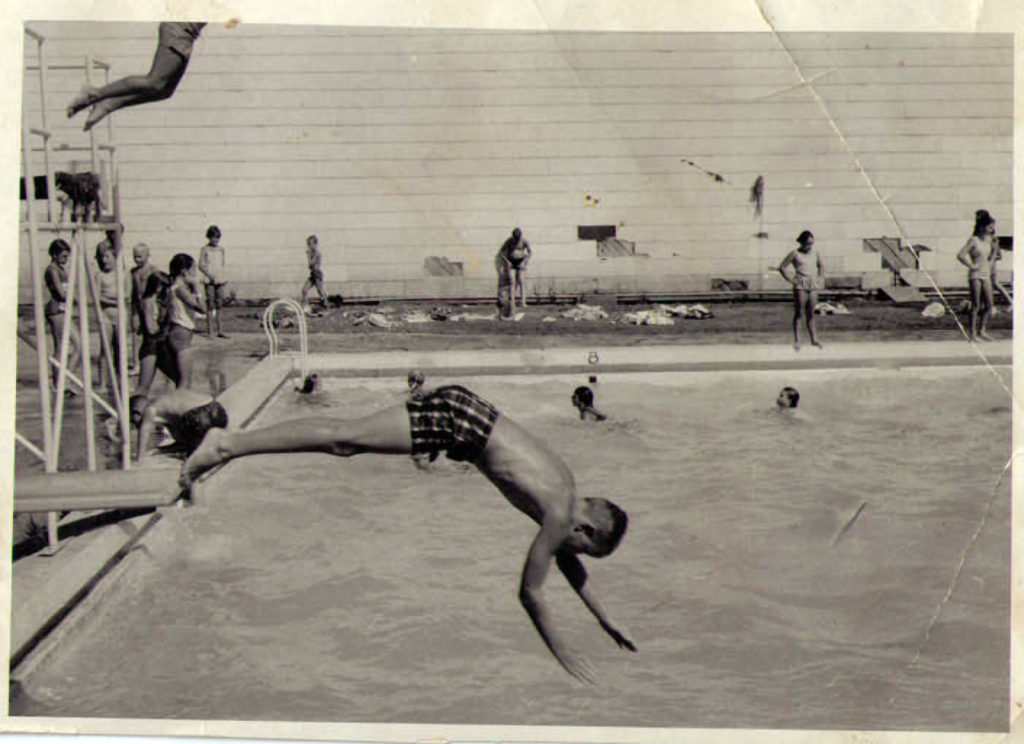 Goat River Swimming Hole, 1930: As in many sports in the Creston Valley, the earliest “swimming pools” were the Goat and Kootenay Rivers, Kootenay Lake, and the deeper ponds and sloughs throughout the Valley. Creston Museum photo.

Exhibition Park 1933: A cement pool was built at what is now Centennial Park in 1933. It is not known how long this pool was in use. It was probably relatively short-lived, as other references state that, from 1929 to 1945, the only swimming pool in the community was at Craigie’s..

Craigie’s date unknown and Craigie’s 1929: From 1929 to 1945, there was a swimming pool in the orchard at Craigie’s ranch (present-day Beltane Nursery). The Craigies built it as a response to some near-drownings at the Goat River swimming hole. It had wooden sides with a dirt floor, and was four feet deep at one end and seven or eight feet deep at the other. The water was fed from irrigation pipes, and trickled over a piece of corrugated tin to gain some heat before going into the pool – that was the only means of heating the water. Change room facilities were rustic – hidden spots amongst the trees, one for girls and one for boys. Mr. Craigie died in 1944, which was probably the reason why the pool ceased operating. His widow, Florence, continued operating the orchard until just before she passed away in 1953. Creston Museum photos.

Civic Centre Pool 1967: The outdoor pool at the Civic Centre opened in 1948, and continued in use throughout the next twenty-five years. The concrete of the pool was cracked by the heat of the fire that destroyed the rest of the Civic Centre in November 1968, but was still usable enough that the pool could be used until the new one was built at the present-day Rec Centre.

Rec Centre Pool Construction c. 1974: Although the present-day Rec Centre was being used by 1972, construction of the pool didn’t begin until a few years later. The pool was opened in June 1977. The community used the outdoor pool for decades, in all kinds of weather. A roofed spectator area gave comfort to parents, but swimmers were exposed to the elements.

After a public referendum, a beautiful 12 million-dollar facility was built and opened in 2011, around the old Rec Centre, with a newly renovated rink and artificial ice system,  a beautiful indoor pool, lazy river and hottub, and new change rooms. The upper floor houses a new fitness gym and physio treatment centre. The attached curling rink and clubhouse lounge was also updated.