In 1958-9 Mike Moore and two RCMP constables started a boxing club, using a ring in the basement of South Creston school.

Some time in the 1960s, Willie Benelli won the Canadian title to go to the Commonwealth Games.

By 1971-2, the club was able to hold events. Major competitors were Bill Ryckman, Wayne Louie, Brian Lansing and Francis Lansing. In 1972 local Tom Burns, the western champion, fought against George Chevalo for the Canadian Title.

In 1973, coach Gordon Lansing helped put on a Sportsmans Dinner, sponsored by the club.

Between 1970 and 1980,the club, coached by Fred Ryckman, Herb Stanton and Gordon Lansing, had about 20 members.

In 1992-3, Brian Lansing and Percy Primrose operated the club in the basement of the Kootenay Hotel. The club finally folded in the later 90s. 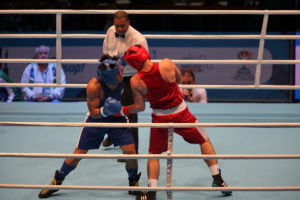