Baseball has been around since 1909 and earlier being evidenced by mention of baseball in the fourth issue of the Creston Review on February 11, 1909.

CR February 11, 1909 – There is a movement on foot to establish a Kootenay Baseball league. Is Creston doing anything to get into the swim? Get a move on boys.

CR April 1, 1909 – We have heard a whole lot of talk from many of our young bucks about the baseball club they were going to start when the spring opened. Supposing they get busy now and be in time.

CR April 29, 1909 – Efforts are now being made to arrange a baseball match between Creston and Y. C. L. teams on the ninth of May.  The teams are very anxious to get together. Creston players also have hopes of journeying to Cranbrook on the 24th, and mixing with the players there.

CR April 29, 1909 – The Baseball Club intend holding a Grand Ball in the near future.

CR May 6, 1909 – CRESTON vs. Y.-C.L. – LUMBERMEN’S CHALLENGE BASEBALL GAME TAKEN UP BY LOCAL FANS. On the 9th inst. a large crowd of Crestonians will cross the boundary line to witness the much talked of tussle at baseball-between the “Creston Buzzards,” and the “Y.C.L. Pine Cats.”  The mixing of these two teams has been eagerly looked for by the local sports for some weeks. The Creston team has been training assiduously during the past week, and a keen struggle may be looked for. It is known that the teams raised between the combined forces of Port Hill and the Y.C. Lumber camp contains many players known to the fans of the west, and so the event of the 9th will be keenly watched. The local team will leave for Port Hill at 9 a.m., to be on hand at the scheduled time of the game, 2 pm.  The make-up of the team will be plucked from the following players: Geo. Mead, 1st base; Ted Malone, p.; Jimmy Long, r.f.; Jack Cameron, 2nd base; Claude Merrill, 3rd base; Roy Telford, c.; Alf. Cotterill, p.; Clarence Corbitt, c.; E. Ryckman s.s.; S. A. Speers, c.f.; R. McPeak, 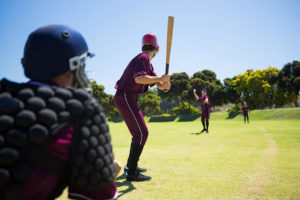